When we think of early modern military, we typically think of infantry, cavalry and artillery. But once in a while while researching you run into a fun little term that provides some color and character to an otherwise monotone palette.

Despite it sounding overly-dramatic, the name enfants perdus were apt. These French enfants perdus were small groups of soldiers, typically musketeers, formed by pulling troops out of various regiments. They were used as skirmishers as well as given specific missions (such as “hold that bridge” or “charge that outpost”). They were also used at the head of regiments to lead attacks.

END_OF_DOCUMENT_TOKEN_TO_BE_REPLACED

DW Documentary released a two-part series on how the Thirty Year’s War ended and the Peace of Westphalia was designed. In fact, it took five years for all the parties to get onboard and led largely by Maximilian, Graf von Trauttmansdorff who represented the Holy Roman emperor.

END_OF_DOCUMENT_TOKEN_TO_BE_REPLACED

Came across this half hour Swedish documentary (English subs) on the Battle of Lützen, where Swedish king and military innovator King Gustavus Adolphus.

The documentary goes to the site where the battle takes place with an archeological crew to find out if the mass graves there were filled with Swedes or Germans. They also figure out what the soldiers died mostly from — swords, musket barrels (blunt force) or shot.

It’s not exactly an eye-opening documentary for anyone already interested in the era, but it’s worth a watch just the same as the Thirty Year’s War continues to be a relatively overlooked bit of European history.

The Thirty Years War is my era of choice when it comes to research and persona portrayal. I stumbled across this great little documentary about the Battle of Lützen (1632) where Gustavus Adolphus was fatally shot.

It’s got some nice research and amazing animation, showing what happened in the battle. It surrounds mostly mass burial grounds at the battle site, and how the soldiers died. 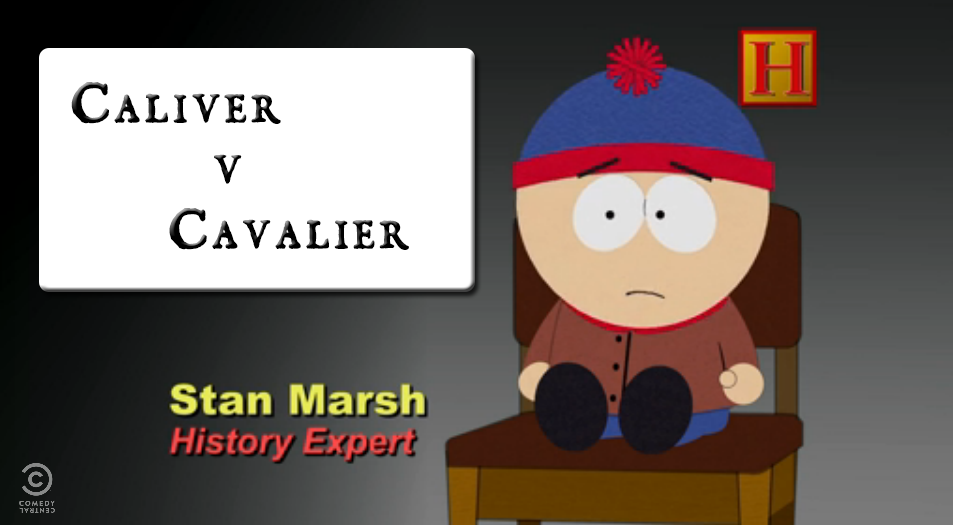 In the SCA I have a French cavalier persona. I also started the Carolingian Caliver Company, a baronial fencing unit here in the Boston-area of the East Kingdom.

This has become humorously problematic as the number one mistake/mix up I run into with my fellow SCAdians is that they call the “Carolingian Calivers” the “Carolingian Cavaliers.” The mix up is understandable, though I sometimes wonder if people think I’m misspelling my fencing unit’s name when I write “Calivers.”

Regardless,  I figure I’d do a quick post to explain the difference between the two. Most people I run into know what a cavalier is, but are fuzzy about what a caliver is.

This was originally posted on JMAucoin.com in February 2015.

Last spring one of my fellow SCA fencers came up to me saying he wanted to be the standard-bearer for our fencing unit, the Carolingian Caliver Company.

I loved the idea. The only problem was that I had no clue how to make a silk banner or flag.

Fortunately, in the SCA if there’s something you want to learn there’s a really, really good chance there’s already someone with the know-how in the society. More fortunately, that fellow was Sir Antonio and he was teaching a silk banner making class at one of my local events. We got to make small little banners, but I’ll save you all from having to see my first attempt. But it was a great class with a handy review sheet that I would use later on. END_OF_DOCUMENT_TOKEN_TO_BE_REPLACED

Researching swords, gonnes and garb during the 16th and 17th Centuries.